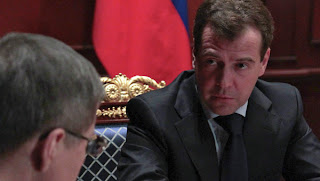 Russian President Dmitry Medvedev ordered on Monday that security be increased at all of the country's airports and transportation hubs after a suicide bombing killed at least 31 people at Moscow's Domodedovo International Airport.
At least another 130 people were injured in the blast that ripped through the airport's international arrivals hall at 4:40 p.m. Moscow time (13:40 GMT).
"It is necessary to step up security at all airports, railway stations and transportations hubs," Medvedev said at an emergency meeting. "I order you, Transport Minister Igor Levitin together with Interior Minister [Rashid Nurgaliyev] to employ the relevant procedures in cooperation with the Federal Security Service."
Reports say the suicide bomber was located among a crowd at the international arrivals gate.
MOSCOW, January 24 (RIA Novosti)
Gepost door Motrell op 09:31