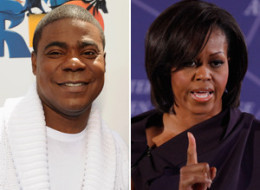 Tracy Morgan should be very, very thankful for the First Amendment.
The "30 Rock" star guested on "Lopez Tonight" and spoke about his to the White House for last summer's White House Correspondents dinner. He may have been on his best behavior while at 1600 Pennsylvania Avenue, but Morgan's recounting of the experience showed that his mind may not have been so well behaved..
While he didn't perform for President Obama -- "I would killed myself if he booed me," Morgan said -- he did get to meet First Lady Michelle Obama.
"I looked at Michelle and she said, 'Hi Tracy!' and I just got hard!" Morgan said. "Michelle looked like a tall mountain, and I'm gonna climb it just 'cause it's there. Kilimanjaro!"
Morgan has spoken about the President and his wife before. In 2009, he caused a scene at Carnegie Hallwhen, during a standup special, he made jokes about a White House sex tape.
"Obama is really changing the White House, because he and Michelle will have the first presidential sex tape out," Morgan said to groans.
Morgan is bipartisan in his desires; he's called Sarah Palin "good masturbation material" and "the hottest MILF in the world."
Watch the video:
Gepost door Motrell op 00:43